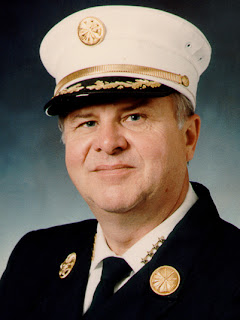 Today We Remember Assistant Chief and City Wide Tour Commander of FDNY, Donald Burns, who answered his last alarm on Sept. 11th, 2001. He was 61-years-old.
Chief Donald Burns was a decorated 39-year veteran of the department and one of the most knowledgeable men in the FDNY often referred to as the "Human Hagstrom.”
On the morning of Sept. 11th, after the 1st plane hit the north tower, Chief Burns arrived on the scene. In the 9/11 documentary filmed by two French brothers, which by complete chance contains footage of the last moments inside of the WTC, Assistant Chief Burns is seen conferring in the North Tower with Battalion Chief Orio Palmer and Deputy Chief Peter Hayden, among others.
The South Tower had just been hit and the men were discussing how to respond to the two towers, and the communications problems they faced. They decided that Chief Burns and Battalion Chief Orio Palmer would proceed to the South Tower to set up a command post at the foot of the WTC.
Before leaving, Chief Burns brought up the issue that the during the ’93 terrorist attack, they had trouble with communications, and they discussed how to communicate through their handy talkys without interference. And then they took off for the south tower.
A 78-minute voice tape recording recovered from inside the towers contains the voice of Chief Burns. He is heard repeatedly calling for additional companies to the south tower, but many firefighters headed for the south tower became caught in traffic or became confused about which tower they should report to. Minutes later the south tower collapsed.
"Chief Burns was the most intelligent man I had ever met," said Deputy Assistant Chief Albert Turi. "He knew more about New York than anyone - the location of any alarm box and every street in every borough." "Anything you ever wanted to know about the Fire Department, he would have the answer." “If you could be half as good a chief as he was you'd still be a good chief."
He is fondly remembered as a "walking encyclopedia" for his vast knowledge of the city.
Fighting fires was not just a job to him, but his passion - one that rubbed off on many of his colleagues within the FDNY. He was hailed as an "exceptional" leader within the department. "He could have retired years ago, but it was his love of the job that kept him going. He could not give it up," said retired firefighter Bob Wood.
Burns left behind his wife Elizabeth, and three children, Lori, Michael, a police officer, and Patrick, a firefighter with Ladder Co. 123 in Brooklyn.
He will be forever in our hearts and always remembered by his warm smile.
We Will Never Forget!
Posted by Vicki Peaslee at 10:22 AM