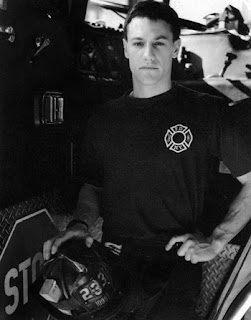 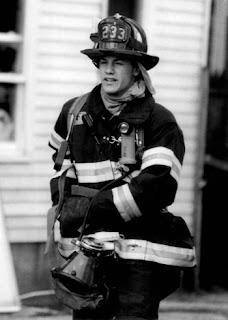 Today we remember FF Timothy Welty, Squad 288, FDNY.
Tim Welty's true trade was in the physical world. A strong, wiry man who could do push-ups with two fingers, he skied, sky-dived and motorcycled, and he played hockey and volleyball for the Fire Department.
In 1993, Timmy got the call to attend NY firefighter training. His first assignment was Engine Company 233, aka "The Tin House”.
During his years at Engine 233, Welty gained a reputation as a fearless and single-minded firefighter, who would let nothing and no one stand in his way to fight a fire. This reputation earned him a spot in the new FDNY "Squad" Companies, which were created after the 1993 World Trade Center attacks as elite specially trained firefighting companies.
Welty moved to Squad 288 in Maspeth, Queens, in 1998 as one of its original members. He was known around the firehouse as "MacGyver" because of his ability to make something out of nothing, and was infamous for yelling during fires, "If you're not going in, get out of the way!" to anyone in front of him.
On September 11, Timothy Welty had finished his 12-hour shift at FDNY Squad 288 in Queens. The sight was visible from the firehouse. Welty called his wife to say he would not be home in time to bring their son to school, donned his turnout gear and jumped on the back of the Hazmat truck as it pulled out.
After the towers came down, nobody knew where Tim was. They believed he had already gone home. His mother was always nervous about him being in the fire department. He always told her to stop worrying, that if anything happened she would be notified. But after 9/11, she was not notified. Tim was officially listed as missing, and like so many other families, she hoped that he had somehow escaped the terror attack. When November came and Tim still was missing, his family knew the time had come to say goodbye.
The duty board for the day at Squad 288 is still preserved in a small memorial inside the firehouse, and shows his name scrawled in chalk.
We Will Never Forget!
Posted by Vicki Peaslee at 7:10 AM