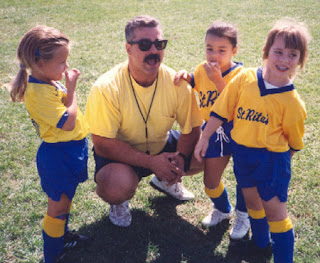 Packed into those compressed decades of Chuck Margiotta’s time on Earth was a love of people and an unquenchable, if not dizzying, zeal for accomplishment. It’s hard to believe everything this veteran firefighter crammed into his way too short life: Ivy League football stand out at Brown University, substitute public school teacher, church leader, philanthropist, youth sports coach, television and movie actor and stuntman (Hannibal, Malcolm X, Law and Order), family man, and don’t forget-gardener and voracious reader. His brother Mike observed to a reporter, “He wasn't happy unless he was doing four things at once, plus one more thing."
It was that one more thing that took him from us. On 9/11 the devoted married father of a beautiful son, 11, and daughter, 13, had just completed a 24 hour shift in Brooklyn filling in for another firefighter. As he was safely headed home, he saw the orange flames engulf the World Trade Center, turned around, and instinctively went to the nearest firehouse. There he immediately hopped on to Staten Island’s Rescue 5 FDNY truck as it sped to save civilians from the chaotic scene. Right before he reached the inferno he phoned his mother to tell her what turned out to be his last words to her: “Ma, it's bad, I love you. I'll call you later."
He left his big footprints all over New York City. Twenty years as a firefighter, fifteen in Harlem, with several years as a running back for the acclaimed FDNY football team. Even after he rose in rank to Lieutenant, he ruffled a few bosses because he was more comfortable with the rank and file folks.
For twenty years, on top of his fire duties, he substitute taught at least two days a week. He was also a private investigator for two decades. He was CYO Athletic Director at his parish and coached kids in four different sports. He was a key organizer of innumerable charity events. He did acting and stunt work across New York in numerous television and movie productions, while still finding time to plant a garden at his firehouse.
As busy as he was, he was devoted to his family. He’d check on his parents—who lived next door, just about every day to make sure they were all right. The hole in his parents’ hearts never really healed. His dad misses the family vacations in the mountains, watching sports on television, as well as the tailgate gatherings at Giants games. His mom even misses cleaning up the constant stream of pretzel crumbs he would leave after helping with chores or home repairs. He adored his wife and kids.
Never Forget!
Posted by Vicki Peaslee at 8:51 AM